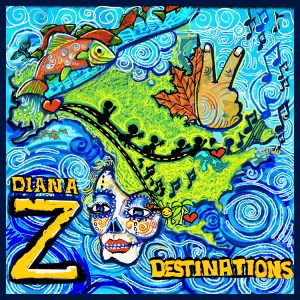 Hello friends and music fans!  I am VERY EXCITED to announce that I am releasing a new album this year that is entitled “DESTINATIONS”.  This title represents many concepts: Favorite geographical destinations, connections of the heart, connections of people around our world.   I can hardly wait for you to hear it!   This album is produced and engineered by my good friend Jim Lewin (Great American Taxi, Edge of the West).
In the meantime, I will be releasing a single with 2 original songs from my featured album…ALASKA, and SALMON SONG that I wrote for Salmonfest.  Salmonfest is a festival held in Ninilchik, Alaska, that has an underlying mission to preserve our wild salmon and their habitat for years to come. Salmonfest has become widely recognized both nationally and within the state as the most compelling and dynamic event in Alaska. For more information about this festival please to to https://salmonfestalaska.org.
Stay tuned for more updates!

Diana Z – All I Want

Diana Z is a local singer/songwriter currently living in Alaska. She makes frequent trips back to Toronto, Canada where she was born and raised. She released her debut album ‘All I Want’ in October of 2007 with a full band to a full house @ Jeff Healey’s Roadhouse. Diana Z has been performing live on stage for over 20 years, at various venues and festivals all over Toronto, across Canada and the United States. Her title song ‘All I Want’ is on the soundtrack of the ‘Moon Point’ movie, an indie film from Toronto produced by Sean Cisterna and Christian Potenza – a sweet and heartfelt story that you must see!

Diana has opened up for artists like Peter Case and Edge of the West. She is currently working on her second album with producer Jim Lewin (Great American Taxi, Edge of the West, Riders of the Purple Sage).

“Diana Z is not just another pretty face. The girl can sing. Her new CD “All I Want” would be a welcome addition to anyone’s collection. I especially like “Coffee Song.” Jerry Foster DJ @ CKWE 105.9 fm